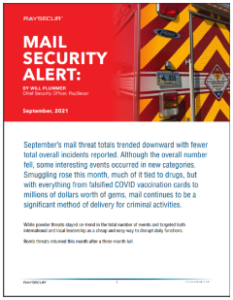 Smuggling rose this month, much of it tied to drugs, but with everything from falsified COVID vaccination cards to millions of dollars worth of gems, mail continues to be a significant method of delivery for criminal activities.

September proved to be an interesting month with mailed threats.  White powder and threatening letters continue on-trend in total numbers, however, the targets have shifted to state and local leadership and away from national-level targets.

This puts smaller cities and governments with fewer response capabilities at a higher risk for exposure and stress on infrastructure.

Smuggling increased this month in the United States for both drugs and other illicit material. Much of what was caught was tied to good screening methodologies and solid practices.

Drugs increased in the news inside of jails and prisons highlighting the continual efforts to stop drug-laden legal mail. Many states have begun to copy all of the inmate mail except for legal mail which, in most cases, cannot be searched without the prisoner present.